April 5, 2016 by Stevie Cromer, Cultural and Enrichment Manager, Partner Liaison
< Back to Blog 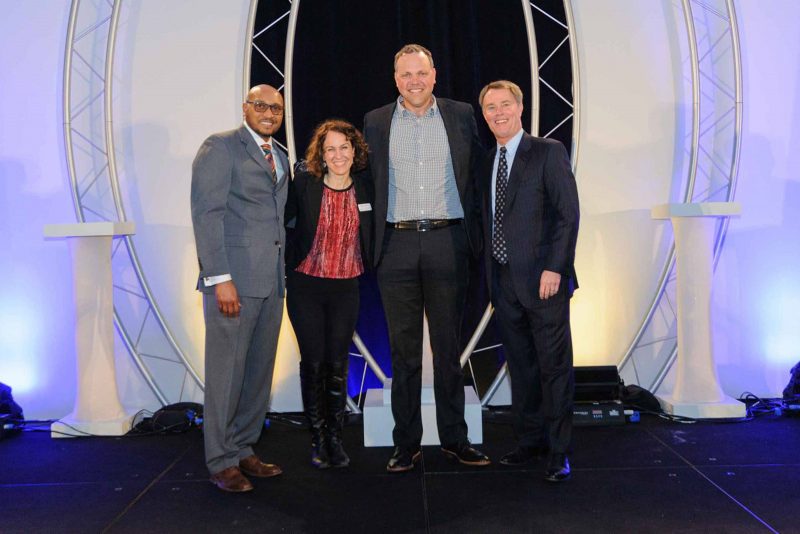 LUNA Language Services was the proud recipient of the 2016 Mayoral Diversity Award for Workplace Diversity! The 15th Annual Mayor’s Celebration of Diversity Awards luncheon was held at the JW Marriott in downtown Indianapolis.  The awards acknowledge Indianapolis businesses that “encourage, embrace and celebrate differences that foster a culture of diversity and inclusiveness”. The Workplace Diversity Award specifically recognizes “a company that has made great strides in the diversity representation in the workplace.”

Chris Waters, LUNA President and Founder, said “This award is a true testament to the talented and amazing staff we have at LUNA, many of them leaders in their ethnic and cultural communities.  We are all humbled by this recognition and hope that it brings awareness to the truly diverse city Indianapolis has become.”

Waters is one of only four white males on a full-time staff of over 30 employees. He manages the company with his business partner and wife, Marina Hadjioannou Waters, LUNA Chief Operating Officer. Additionally, the company’s three directors are all women, including a Burmese immigrant and a Bosnian refugee. LUNA’s full-time staff is comprised of 65% females, 44% racial/ethnic minorities, and is fluent in thirteen languages including Spanish, French, Chinese, Vietnamese, Russian, Greek, Japanese, American Sign Language (ASL), and five Burmese dialects including Chin, Karen, and Burmese.  LUNA proudly provides accommodation for employees with disabilities and has several employees whose native, or first, language is ASL.

Naw Phaw, LUNA Director of Language Services, began working with LUNA in 2008 (Indianapolis Interpreters at the time) as an interpreter and language coordinator. She said, “Our company embodies diversity of all kinds. I speak to people from literally dozens of different cultural backgrounds on a daily basis. I love learning about so many other cultures from around the world, and appreciate the opportunity to share parts of my culture and heritage with my coworkers at LUNA.”

LUNA Language Services operates for, by, and with the inclusion of a multicultural and multilingual workforce.  Our company aims to mirror, respect, and honor the diverse population it serves.  LUNA is committed to non-discrimination in the areas of gender, religion, race, ethnicity, disability, and sexual orientation. We believe strongly in celebrating differences and aim to be a leader among other growing businesses in Indianapolis.

As part of LUNA’s effort to cultivate diversity, inclusion, and tolerance in the workplace, the company’s position on these matters is introduced in every interview with prospective staff.  Then, upon onboarding, all new employees are trained on non-discrimination policies, which were written to broadly include the many differences in our population beyond race, gender, and disability to include sexual orientation, sexual identity, ethnicity, religious affiliation, and culture. Finally, LUNA educates and celebrates these differences at work to cultivate a culture of tolerance.

LUNA’s recruitment efforts further demonstrate the company’s diversity and inclusion efforts by contracting with nearly 500 language interpreters and translators from the immigrant and refugee communities, as well as working with talented multilingual individuals throughout the world. LUNA is privileged to work with over 250 ASL Interpreters serving the Deaf and hard of hearing communities, and is a proud member of the Diversity Roundtable of Central Indiana, as well as Indiana Competes, a coalition of businesses supporting diversity and inclusion in the workplace.

Established in 2001 by Chris Waters, former Peace Corps volunteer and Indiana native, LUNA Language Services was founded with a mission of service. LUNA offers interpreting and document translation services in over 200 spoken languages and American Sign Language and provides work for over 700 language providers across the state.